Scroll to bottom to see video on Sharky's war against the Pattaya mafia police.

Living within and thriving in this den of iniquity is Sharky Ward. A muscly, tattooed behemoth in teenytiny shorts with ‘SELF MADE’ imprinted on his knuckles. This superpimp is no guy to mess with. He isn’t even a guy. He’s a flesh mountain, a hulk, a titan, a looming orc with a face like sunshine. Sharky grew up tough living on the streets in New Zealand, an ownerless stray, hustling people at pool to make enough to get by and learning The Game, his so-called business ethos. This self-styled entrepreneur/ pimp/loan shark has a take-no-prisoners attitude towards business. Cross him and he will take you, your family, your cousins and anyone who knows you down.

But, in his old age (48), Sharky leaves most of the physical labour of punching out lights and breaking kneecaps to his familiars, and has revealed a gentle, charitable and mushy interior. He enjoys spending his free time roaming the beachfront, picking up lady-loves and throwing them over his shoulder, while going around feeding strays and telling kids to stay in school. Sharky is protective over his Pattaya community of misfits, safeguarding prostitutes from the dodgy Thai cops and bailing them out of prison. Normally at war with the Thai police mafia, Ward was once enlisted by the cops to help hunt down paedophiles operating in the area, if it’s for the greater good, Sharky plays ball.

Sharky plays Pimp to more than 600 sex workers. Never seen far from his staff, Sharky always has his eye on them, in case he needs to crush a customer in place and get his lady’s back. Ward describes an affinity between himself and his girls, a profound understanding of The Game. Don’t get emotional. Business is business. Don’t get me wrong, he isn’t an emotionless psychopath, but this damaged giant can’t afford to let his eye slip from the ball. Relationships just complicate shit and bring you down. Ward is known for stirring the shit up with the local police, peeling back the sun-kissed skin of bureaucracy and waving the rotten entrails of a parasitic system for all to see, protesting it through public forums. It’s with absolute certainty that one could say Ward is the nemesis of the Pattaya Police, always looking for opportunities to start a pissfest. While in their bloodshot eyes, the Pattaya free market is just one soon-to-be-dead thug away. Most recently, Sharky was involved in a police scandal, where he arrived home only to be raided by police minutes after, during which two crack pipes were discovered. The pipes were obviously a plant so the pig-fuckers could steal his gold and cash, and piss him off.

Sharky was arrested for possession and locked up. Our frustrated hero paced his cell, ranting about the missing search warrant and the finger prints and blood tests that needed to be done to clear his name. Since his release, the damning crack pipes have mysteriously disappeared, along with the possession charges. Ward has been flouting the incident in the news, trying to fan the shit-stink of corruption out to those who can do something about it. The Thai police, who are essentially a mafia making their money terrifying and bribing tourists, sex workers, and smuggling ivory and other contra ban, not to mention fostering the thriving drug trade in the area.

In the end it seems the pigs are batting away Sharky’s furious accusations squealing that it was all a misunderstanding. Sharky hasn’t shown any signs off back down. He has been visiting the police station every day, nagging the cops relentlessly about his case. It’s likely the cops at the station are starting to have nightmares in which Sharky appears bending their bodies over and ripping them a new asshole, until they wake up to have shame-jizzed their pants.

In a saggytit effort to save face the police have opened an inquiry to address Sharky’s corruption case and gold theft, they want to see all Ward’s proof of their offenses before they make their next move, the sneaky cunts. 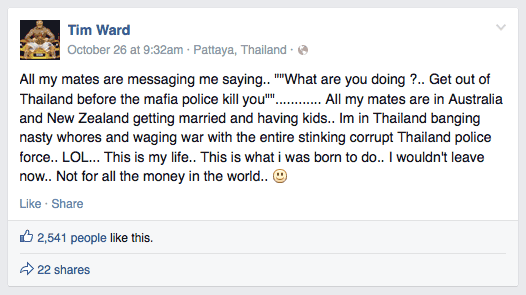 Life is hard in Pattaya, but Sharky ain’t goin’ nowhere, he’s got business to do and bitches to keep.

Video on Tim Sharky's War with the Pattaya Mafia Police